Infrastructure and cargo volume contribute to the large congestion that happens outside of India’s major ports. With queues that can take anywhere between 24-72 hours to clear, Indian companies who regularly export out of India, and its local forwarders have to manage and manoeuvre past this congestion. Properly managing this congestion has to be done in order to ensure their cargo catches their intended vessels to meet delivery dates. Here are some of the major ports in India and the market realities that they face

Dealing with port congestion in India 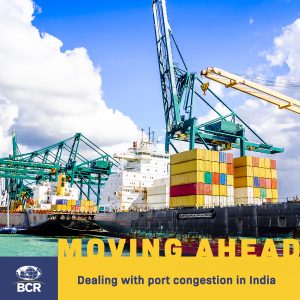 Infrastructure and cargo volume contribute to the large congestion that happens outside of India’s major ports. With queues that can take anywhere between 24-72 hours to clear, Indian companies who regularly export out of India, and its local forwarders have to manage and manoeuvre past this congestion. Properly managing this congestion has to be done in order to ensure their cargo catches their intended vessels to meet delivery dates. Here are some of the major ports in India and the market realities that they face

Apart from housing an iconic Indian monument called the Gateway of India, a tribute to its colonial heritage, India’s Nhava Sheva, 50 kilometres from Mumbai city, is the gateway to trade in India. 60% of India’s overall containerised cargo moves through Nhava Sheva’s port. Cargo from central and North India are funnelled through this gateway.

Being the largest cargo gateway also means that it is the most congested port in India. With truck queues outside the port stretching 10 kilometres long on most days, waiting for their turn to drop off their containers inside the port. It’s not uncommon to notice while driving through – truck drivers carrying mini gas cookers and setting up next to their trucks as they wait their turn to gate in their cargo. These queues can cause frustration and anxiety for customers and forwarders as they try and ensure these containers are gated in on time.

The most important factor is to have enough lead time at origin. Make sure your containers are queued outside the port at least 4 to 5 days before sailing, which should provide a safe buffer. Our advice to customers is to always flag this lead time with their factories so that there is clear communication and deadlines are met. In addition to the typical traffic outside the 3 terminals at the port, any instance of labour strikes or monsoon season (which can be heavy at the peak) can cause further delays outside the port.

Mundra port is the newer brother to Nhava Sheva on the West Coast, and has taken over some of the burdens by being one of the major calling points for vessels moving from the western coast of India to major gateways. Mundra is the preferred port for cargo moving from North Indian cities by rail since it’s less congested. Most of the containers from this region are railed straight into the port without having to wait in a queue outside. Mundra also takes cargo from India’s Gujarat region. Although the rail frequencies are less than that of Nhava Sheva, it’s a more popular choice. The main hazards with rail from the North to Mundra would be during monsoon season, where heavy rain can cause some parts of the rail line to flood and subsequently end up closed for repairs. This can increase your lead time from North India.

Chennai’s port, being one of the oldest in South India, suffers from similar infrastructure issues. However, it has since shared it’s workload with Kattupali port, 30 kilometres away, which has seen an increase of carriers moving their feeder services there.

Chennai’s congestion is far more manageable than Mumbai, with waiting time outside the port an average of 8 hours for each truck from when it queues up.

The other major port in South India, Tuticorin does not suffer the same problems with infrastructure as the others. Being a small city, the port primarily services the industry around the town as well as the textile business moving from South India, which means it’s a smooth ride through to the port, with an average waiting time of 2 hours.

Kolkata port has the unique characteristic of being a river port. This isn’t ideal for a city which ships out a sizeable amount of cargo, as it plays with the berthing and departure time of its feeder vessels which call Colombo and Singapore. Being a river port, there are many factors that can cause inconsistencies with draft to port, which can cause last minute changes to the schedule and therefore puts the feeder in danger of meeting the intended connection at the major port hubs.

One has to be flexible in being able to change their feeders in order to meet the intended mother vessel in case the low draft affects its intended feeder.