Have you ever sat down with a Senior Executive in the Freight Forwarding and Customs Brokerage industry sector and listened to their story about how they came to work in the industry? In Australia, you’ll hear a common theme. You’ll hear stories that include, “back when I was a runner”, and “I fell into the industry and never got out”. Roles such as the “runner”, freight clerks, container controller and documentation were all entry level roles going back to the 80’s and 90’s. 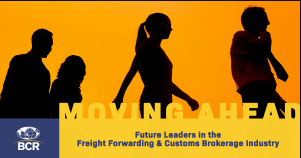 Have you ever sat down with a Senior Executive in the Freight Forwarding and Customs Brokerage industry sector and listened to their story about how they came to work in the industry? In Australia, you’ll hear a common theme. You’ll hear stories that include, “back when I was a runner”, and “I fell into the industry and never got out”. Roles such as the “runner”, freight clerks, container controller and documentation were all entry level roles going back to the 80’s and 90’s. These roles acted as the breeding ground for future industry leaders and specialists. In those days, there was no Supply Chain Management course at University; the closest you would get would be a loose-fitting subject named Globalisation tucked away in the 3rd year of an International Business Degree. Many of those who entered the industry via these roles during the 80’s and 90’s are now senior managers, executives, CEO’s and Managing Directors. But from where will the future leaders of our industry comes from? Who’ll be leading our companies in 2040 and beyond?

The nature of our industry and its workforce has changed so much in the past decade. With changes comes the need to adapt? Remember the role of the runner? That person would literally get around Sydney, Melbourne, Brisbane or whatever capital city they lived in to courier documents from Customs to Quarantine to the Customs Broker and more. That person would inevitably get to know many in the industry, what we now call networking, and gain an intimate understanding of the nature of the documents and regulation that underpins so much of what happens in an international trade transaction. Over time, that runner would be promoted; change companies and advance their career, with many becoming industry leaders. Other entry levels roles abounded; data entry for the creation of bills of lading, compiling of goods as they enter the country, even invoice production and other documents. Those who diligently performed these tasks unknowingly were building strong foundations in their industry and knowledge base. They are the industry experts of today.

Fast forward to 2019, these entry level roles no longer exist in Australia. Many have been sent offshore, or Robotic Process Automation has been introduced to perform these tasks. With the loss of entry level roles comes a conundrum for the industry. The industry’s loss is the recruitment agent’s gain. The very nature of the Transport & Logistics industry and the Freight Forwarding & Customs sector is that it is not an attractive industry. It’s not sexy and lacks a coordinated marketing approach to attract school and top university graduates. Most school age and university graduates would not even be familiar with the industry, let alone understand that it contributes more than 8% to Australia’s GDP. So, what has happened?

You only have to read the news to understand that the financial performance within the industry is tough. Massive losses are reported quarter on quarter, year on year by those trading publicly, particularly the shipping lines and airlines. I know of many freight forwarders, transport companies and others who have had their fair share of struggles. We’ve seen umpteen acquisitions in the industry, and we should expect that consolidation to continue. These financial results are not sustainable. No one gains when a company like Hanjin fails.

To improve their competitive positions, in the late 90’s and early 2000’s massive shared service centres were opened by the carriers and other multinational companies in China, the Philippines, India and other locations where the cost per employee was a fraction of what was paid in Australia. It was at this point that those entry level roles of our industry diminished. Roles of documentation clerks, those who cut bills of lading for exporters by the thousands were transferred to the shared service centres. Even the humble container controller had their role sent offshore, and many others soon followed. Small and medium sized freight forwarders and customs brokers all jumped on board because not doing so would mean certain doom. You could employ a team of 5 offshore for the same cost of a single data entry specialist in Australia. No annual leave, no payroll tax, no sick leave and the entire human resource management requirement that comes with being an employer. The end result was predictable; a contraction in the skilled workforce in the freight forwarding and customs brokerage sector in Australia. Savings that have been realised in off shoring may soon be neutralised by higher wages due to demand exceeding the supply of talent in the industry.

At the same time as roles were being off shored, the digital world has expanded. What started with myspace, Google, Yahoo and Facebook has now proliferated into an industry that did not exist 20 years ago. Fast forward to today, more and more business is transacted online, consumer expectations are high, and Generation Now brought up on a diet of fast food (fast being the pertinent word) expect everything…like, now! Apparently, we are now so time poor we no longer have time to go up to the local takeaway to collect our fish and chips or Chinese takeaway. Instead, we click on our device and we order the same takeaway, but have Uber Eats to deliver it to us. So, what’s my point?

Change is inevitable. That’s all good, roll with it. In the case of our industry, the changes in the labour force have been so profound that where once a career path started as a runner and ended up as the CEO, these roles are gone. The industry’s career pathways that once were in place (informally at least) are being redefined and reshaped.

As a result of margin squeeze, the pursuit of profits and shareholder return, roles have been sent offshore to cut costs. And it works. Let’s not deny that. The cost of labour in China, India or the Philippines remains a fraction of Australian award wages. The quality of the staff in those locations is in many cases exceptional, and they do a very good job. But that doesn’t solve the problem in Australia.

What do you do when you’re recruiting for a vacancy now? Well, you can probably pay a recruitment agent. There’s a place for everyone in our market, however, the recruitment agents are faced with the same challenges. Of course, there’s also SEEK, and there’s this very medium I am using now, LinkedIn. But are we seriously going to find our future leaders of 2040 on LinkedIn or Seek? Maybe, but I doubt it.

One BPO in the Philippines now employs over 500 people in our industry. They have only operated for 5 years and grown from a team of 7 in that time. Those 500 plus jobs only 5 years ago were all in Australia. Where are the future leaders going to come from if the entry level roles that for so long provided this pathway are overseas or performed by robots? Where are the specialists who are great at their job and happy to bunker down and earn an honest living without feeling the need to climb the corporate ladder going to come from? These people are invaluable and the backbone of most companies. The gaps are widening, and the need to attract talent to the industry is becoming of great concern. After all, it is the people and the systems they use who move freight around the world. Freight doesn’t move itself, well not yet anyway. The most powerful systems and the biggest assets still require people to run them, to coordinate them and make it all happen.

The industry needs to attract, develop and nurture its own talent. It’s a shared responsibility. The entry levels roles have changed. They are now Cartage coordinators, Customer Service, Compilers, Procurement and many more. Tried to recruit for these roles in the last two years? The cupboard is pretty bare – our industry simply lacks the attractiveness of those in which we compete against for talent.

With all change comes choice. We can accept our fate, and feed on the limited talent pool currently available. Wages are artificially inflated as businesses compete for the dwindling talent pool, and companies paying over the odds for mediocre talent. Or we can be proactive and work to develop the talent pool so future generations in our industry will not ensure the same shortages of talent that we do today.

Over the last 10 years, BCR has invested time and resource working with the University sector. That was our choice. We recognised that the industry attractiveness was low and the talent pool shrinking. We made a choice to be proactive and develop our own talent. Over this time we have also seen the expansion of logistics and supply chain management in the higher education sector. BCR had our first intern from the Queensland University of Technology (QUT) in 2010.

Since that time, BCR has had many interns. QUT pioneered the Transport & Logistics industry internship, and we have has seen more and more universities across Australia adopt similar programs. I now look at the career these interns have taken (yes, via LinkedIn in most cases) and it gives me great pride to see that most of them are still in the industry, in more senior roles and seemingly making positive contributions. These young people who did their internship with BCR as part of the final Semester of their Business Degrees are now 1 to 10 years into their careers. They will be the future leaders in 2030 and 2040.

On last count there is over 1,000 freight forwarders and Customs Brokers in Australia. Companies range in size from multinationals employing 1000+ staff, to the SME employing 2. What they all have in common is the changing dynamic of their workforce, the lack of formal entry level roles and a limited talent pool from which to recruit and fill important roles. If each of these companies invested in just 1 intern per year for the next 10 years, that’s 10,000 people who would have been attracted to and entered our great industry. In 2040 they will be the leaders in our industry, they will be in specialist roles and the staff you cannot do without. If 50% of these remain in the workforce, that’s 5,000 skilled employees moving freight around the world and this great country of ours. The issues of attracting, recruiting and retaining talent would in many ways be overcome. It’s not a silver bullet, but it’s a way forward. By taking some shared responsibility as an industry, we will see a more sustainable workforce, a workforce whom by our very nature is proud to be associated with this industry.